In my readings I frequently come across dogs who not only see spirits of other animals but actually interact with them. When I do a distance reading and hold the photograph of the dog, I may see other animals alongside that dog. Sometimes it's clear that the dog is one who has departed and is acting as a spirit guide and companion for the still earthbound friend; other times I need to seek clarification from the human.  In many cases, I'll ask questions that get an enthusiastic "yes!" or "I can't believe you saw that!" Such questions aren't an invitation for the human to think I'm taking shots in the dark or giving a vague /generic reading. I have asked questions and shared specific images like these: "Did you have a tri-color sheltie at one time? I see a sheltie sitting next to your dog"  or "Why am I seeing a black pug?"  Earlier this week I did an e-mail reading for an ailing dog who was just diagnosed with cancer and shared this with the client: "He wants you to commission a sketch of him but not alone. There's a smaller dog he wants sitting beside him, a dog he was close to." The owner knew exactly who it was, a smaller spaniel who had recently died, a dog the cancer stricken one had grown up with. They're still together even though the human eye cannot see this. We need to activate our third eye to recognize this.


These visiting spirits aren’t always known to  the surviving dog. Sometimes they don't know the dog, who may have arrived in the home after the dog passed over. I've read for dogs who show me very specific spots by a window -- and most often in the closet -- that they scurry too and sniff or bark at. I've had sessions with dogs who know where in the house the spirits are visiting and the owner doesn't understand their preoccupation with that spot. Last fall I did a reading for a dog who woke up, walked into the closet and scratched the floor at 3 a.m. daily. I told the owner there was a spirit of another animal in the closet and asked if she'd noticed anything unusual,  and she verified that their departed cat, who was rather mischievous, had spent a lot of time hiding out in the closet.


One of my favorite clients was Buster, a tremendous -- and I mean TREMENDOUS -- Rotweiler who had multiple ailments. I saw him twice as he was nearing death and his human caretaker, Lisa, wanted to know if he understood what was happening to him. He was not only a profoundly imposing presence but he was a profoundly enlightened spirit as well. As I held him, he showed me an image of being lifted up to the heavens in a chair. When it is his time for his transition, he said, he wants his spirit to gently ascend in a chair.   Lisa was visibly shaken, and when I tried to assure her that  Buster wasn't yet  ready to leave, she said,  “No, that's not it." She explained that mother had died in the past year, and she’d been desperately trying to make contact with her spirit through ritual and meditation to no avail, which left her feeling powerless and lonely. After a few months, she said she had only one dream of ( or visitation by) her mother and nothing after that. In her dream, her mother, in spirit,  seated in the living room chair, gradually levitated toward the sky until she was completely absorbed by heaven.  Buster saw this scene as well.


When I had to let go of my soul mate dog, Seamus, I did so only after he showed me the image of some of my other dogs in spirit form standing around him waiting to escort him home. Then I knew it was right no matter how much the human side of me wanted to resist.


Today I had another spiritual visitation shared by my little one, Frankie.


I acquired him, a Chinese Crested rescue,  as a result of an image I received in meditation from my schnauzer, who had recently passed into the spirit realm. I was meditating when her spirit visited; she showed me a photo of what I thought was a Saluki pup, and a week or so later, as I was perusing the Pet Finder Adoption site looking for Chinese Cresteds, a photo jumped out at me....I called the rescue group, met the dog, was investigated, and two days later he came to live with me. Well, just a few minutes ago I decided it was a quiet enough afternoon to go deep into meditation to do some healing and questing work. About 15 minutes in, there she was....the image of Gracie, my schnauzer, moved forward in my vision. As she stopped into say hello, Frankie, who was in his crate in another room, let out two or three whining howls. He saw her, too. It seems they are still connected. Here's the original photo from Pet Finder. 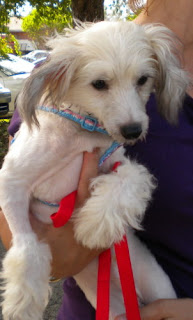 I’d love to hear from anyone who has similar stories to share!  Please visit the Animal Reiki Circle on Facebook and request membership.

Popular posts from this blog

June 09, 2017
What is our human responsibility to the earth and its non-human inhabitants?  Traditional Biblical scholars would say one of master-servant and ecologists would say one of caretaker.  However, using either frame, neither movement has responded in full view of the evidence presented throughout the Bible that God clearly included animals in covenantal relationships. With Biblical scholars neglecting  the sanctity of animals and secular environmentalists neglecting God.  A closer look at the Old Testament reveals that God designed humankind’s role in relation to the animals as one of stewardship rather than domination .  Traditionally religious people often cite  Scripure justify  a master/servant relationship between humans and animals  rather than one of partnership, but  deeper investigation invites us to see texts rich with references, both literal and figurative, to the partnership between humankind and the animal world.  From Genesis through Prophets and Wisdom Literature, the
Post a Comment
Read more

God's Covenant with Animals in the Old Testament

May 24, 2009
What is our human responsibility to the earth and its non-human inhabitants? Traditional Biblical scholars would say one of master-servant and ecologists would say one of caretaker. However, using either frame, neither movement has responded in full view of the evidence presented throughout the Bible that God clearly included animals in covenantal relationships with Biblical scholars neglecting the sanctity of animals and secular environmentalists neglecting God. A closer look at the Old Testament reveals that God designed humankind’s role in relation to the animals as one of stewardship rather than domination. Traditionally religious people often cite Scripure justify a master/servant relationship between humans and animals rather than one of partnership, but deeper investigation invites us to see texts rich with references, both literal and figurative, to the partnership between humankind and the animal world. From Genesis through Prophets and Wisdom Literature, the writers of the Ol
2 comments
Read more

Why I Chose Animals

December 24, 2009
I suppose my mother had something to do with me loving animals. From the time I was five, she was bringing home creatures small enough to go undetected in our Brooklyn apartment: turtles, tortoises, and a half-moon parrot with whom I bonded so deeply that the memories of having to give him up (I had severe allergies) still fly at me like unwelcome shards of glass. I remember crying in the back seat of the car, my father double-parked with the engine running while my mother returned the bird to the pet shop. When she came back outside, she was holding a large tortoise, waving it at us, a permission seeking gesture for my father, who banged his hand on the steering wheel and yelled, "Goddamn it, Rhoda!" But we won. The tortoise came home with us. The parrot story goes deeper than simple loss of an amusing companion (which is never simple, anyway). At the time, I was five and silently enduring molestation at the hands of my paternal grandfather. I won't delve into the psych
Post a Comment
Read more

Lisa Shaw
Lisa is a Reiki Master and Animal Communication Specialist who has been a metaphysical teacher for 25 years. She holds an M.F.A. in writing from Brooklyn College and an M.A. in Pastoral Ministries from St. Thomas University. In the "real world," she has been an English Professor for over 30 years and the recipient of numerous teaching awards. As an alternative practitioner, she offers classes in meditation and healing and regularly donates services to humane organizations. Her animal communication work has been featured on local South Florida television, on ABC News, and in the Sun-Sentinel and The Miami Herald. She is member of the Animal Communicators Coalition for Animal Welfare and the international Distance Healing Network for Animals. She conducts a distance Reiki circle for animals every Sunday morning and evening, accessible through Facebook.